February 26, 2013. It was clear from the beginning, Finn was going to choose his birthday. After weeks of pre labor, and a few trips to the hospital thinking it was the real deal, Sara woke up just before 1:00AM on the morning of the 26th with her water breaking. After gushing some water in various parts of the house she tried to get things together to leave for the hospital, she finally made it out the door and to the hospital at about 3:30AM. I got to the hospital at 5:00AM to join Sara and her mother. Dilated to a 3.5, the nurses were in the process of doing a PH test on the fluid to determine if her water did indeed release. (Like the six gushes of fluid on her bathroom, bedroom, and kitchen floors didn’t prove anything). When the PH test turned out to be inconclusive they did a culture test, which came back positive, and for good measure they did a third swab test to break the tie. And wouldn’t you know it, the bag of waters had definitely broken.

Labor inevitably started and Sara’s contractions came, sporadic at first and not too strong, she was able to talk through them. We got comfortable thinking it would be awhile. Her mom fed her from the “nourishment center” with crackers and juice. When that turned out not to be enough at 8:00AM she went and got breakfast for us at McDonalds, nothing like an Egg McMuffin to get your energy up for having a baby. With a mouth full of breakfast sandwhich Sara made the prediction that baby Finn was coming at 2:06PM.

By 11:00AM Sara was dilated to a 4.5, and they started her on pitocin. Just a low dose and gradually her contractions were 3-5 minutes apart and definitely strengthening. By this time she had moved to the birth ball and needed to concentrate on relaxing through each contraction. But in between she kept up a conversation like nothing else was happening. It was incredible to see. Much of the morning Sara described her contractions as just pressure! So wonderful!

At  12:45 nurse Jeanine (I just need to go on a small tangent, Jeanine was amazing!! She did a fabulous job. She gave wonderful advice and information. She helped you through contractions; she was just a pleasure in the room!) She checked her to find she was dilated to a 5.5. Just after this things started to get really intense, Sara moved up to the bed positioned on her hands and knees. She was’t talking much but at about 1:15-1:20 she made the comment that she thought she was going to have a bowel movement. I knew this was a really good sign. Although because Sara had just been checked a half hour before and being dilated to a 5.5 I wasn’t sure if her baby was positioned for her to push him out yet. I called nurse Jeanine to tell her that Sara was wanting to push. It was at that time that Sara was done. “I think I want an epidural.” She said. “You think? I am not going to get you an epidural unless you know you want one.” Jeanine responded. With new resolve Sara made it through a few more body trembling contractions when she exclaimed, “Ok, I definitely want an epidural!” Jeanine left to go get the anesthesiologist as she lamented, “I thought I could do it, but I can’t. It’s too much, I can’t.” Sitting on her knees with her head down, crestfallen. Jeanine came back with the news: “The anesthesiologist just went in with another lady but she is really fast, she’ll be here in about 15 minutes.” Sara were dismayed, 15 more minutes!? She didn’t think she could do it for another 15 minutes. We assured her that she could absolutely do it, because she had been doing it, it was only a few more contractions. Jeanine really wanted to check her first because we knew Sara had been pushing. It took some coaxing and maneuvering; Sara definitely did not want to move, (I don’t blame her one bit) to get her to a slanted position to check the baby. The anesthesiologist walked in so her mother, Jen and sister, Megan walked out of the room, (they told us only one person was aloud in the room when administering the epidural so I stayed with her.) At the same moment she walked in we lifted Sara’s leg up while she lay on her side, to see that baby Finn was well on his way out! We are talking his head was a good two inches past crowning! The anesthesiologist walked right back out, hitting the call button for the nurses on her way out. In rushed a half dozen nurses. Jeanine only had one glove on and needed someone to put her other glove on as she held baby Finn’s head with one hand. A few seconds later Finn was born, 1:39PM! No time to call the doctor, her nurse delivered her baby.

“I DID IT???  I DID IT!!!!” Sara exclaimed. She couldn’t believe that she had done it! Her mom and sister ran back in the room, shocked that there was a baby there! I think we were all kind of shocked, the tears of happiness started to flow from all of us.

Sara did an absolutely incredible job! It was one of the most amazing births I have ever witnessed. That Finn of her’s is one special boy. 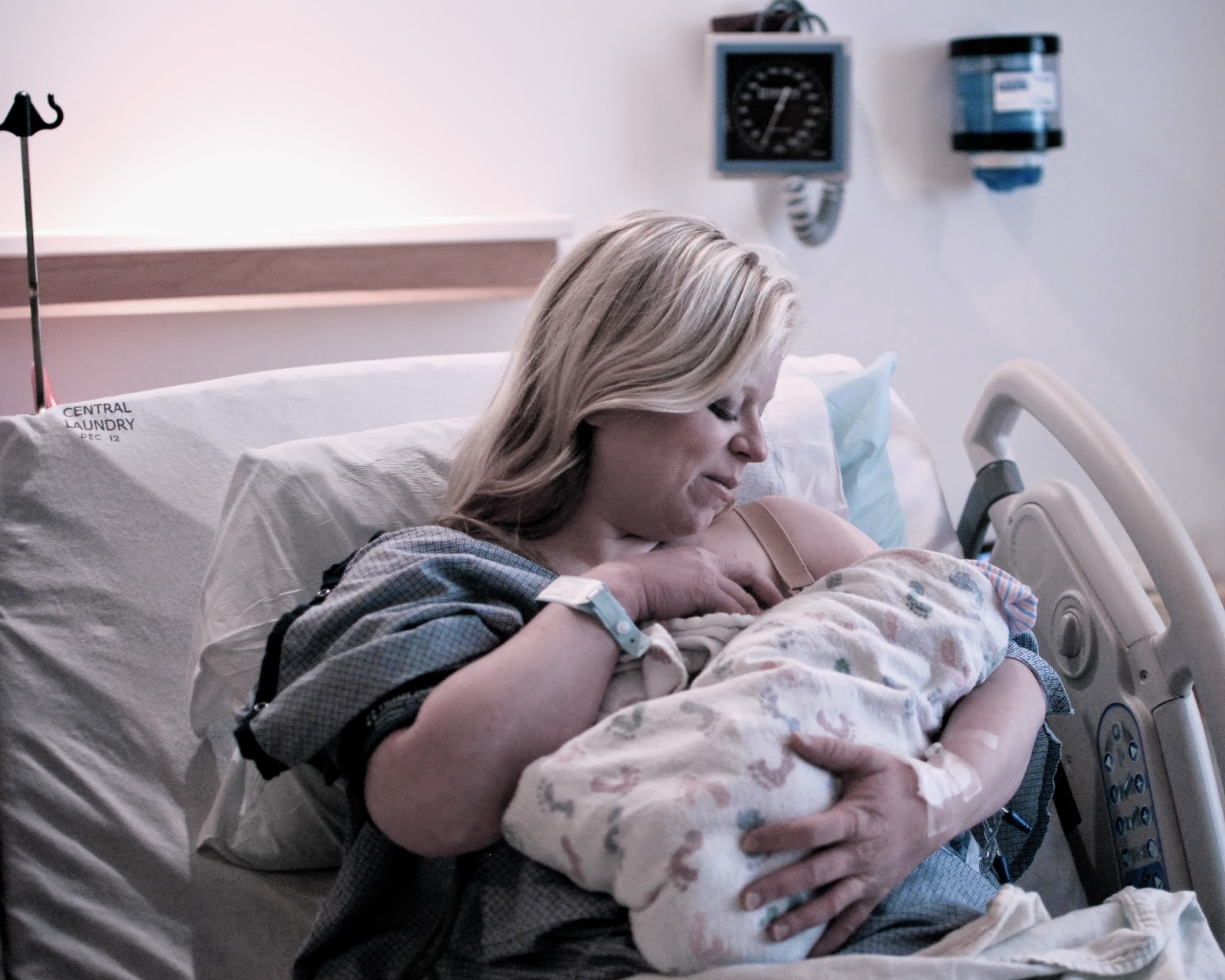