I think everyone knew sweet baby Jason was a special spirit, but none more so than his mama and daddy. There were so many special spiritual experiences surrounding the development and birth of baby Jason. I have never known parents who understand so deeply that they were already parents to their unborn child and sought revelation for each situation that arose to help make their decisions. Both Ashley and Justin were very much bonded with this baby and trusted their intuition completely.

Ashley had been having issues with high blood pressure making it a concern for her health care providers. They put her on bed rest and Justin and Ashley fasted and prayed for answers on how this baby needed to come, seeing that there was a chance the natural unmedicated birth they desired was in jeopardy.
Ashley, being the intuitive person she is, felt impressed that there was a strong association with past health issues she had had. Which would effectively complicate things with delivery if they didn’t take action soon. The decision to induce at 39 weeks was made.

The next morning Ashley was started with Pitocin, and already having regular pressure waves. Justin was texting me to keep me updated with all the going-ons and dealings with the medical staff.  Around 7:00AM he told me the Dr. had come in and said he was going to rupture Ashley’s membranes in an hour. I got incredibly nervous, what? Why?? Rupture her membranes?? Now? When she was so early in her labor presenting only at a 3???  Supposedly it was to get things going. I wasn’t at the hospital yet, and as I was pressing Justin for more details. He admitted he wasn’t sure if the Dr. said rupture or strip her membranes (two very different things). Even now I’m not sure what the intentions of the Dr. were but I told Justin if he brings out a crochet looking hook to not let him rupture her membranes. Of course it wasn’t my decision to make but through my communication with Justin he assured me Ashley and baby were doing great and there was no medical need to speed up the process. Thankfully it was avoided and her bag of waters were not artificially ruptured.
I arrived at the hospital close to 10:00AM and Ashley was already exhausted and labor was hard active labor. Justin and I got in there and tried hard to help her feel any measure of comfort as she labored. Putting lots of counter pressure on her back and hips, helping her change positions; semi-reclined, hands-and-knees, birth ball, standing and swaying. Ashley was laboring so well. It was at about 11:30AM when her nurse (Linda) came in and I asked her how they could tell when Ashley’s body was producing her own oxytocin labor hormones and the Pitocin wasn’t needed? “Well, we can only know that if we turn off the Pitocin and she still progresses.” Ok, can we try that? Turn the Pitocin off? 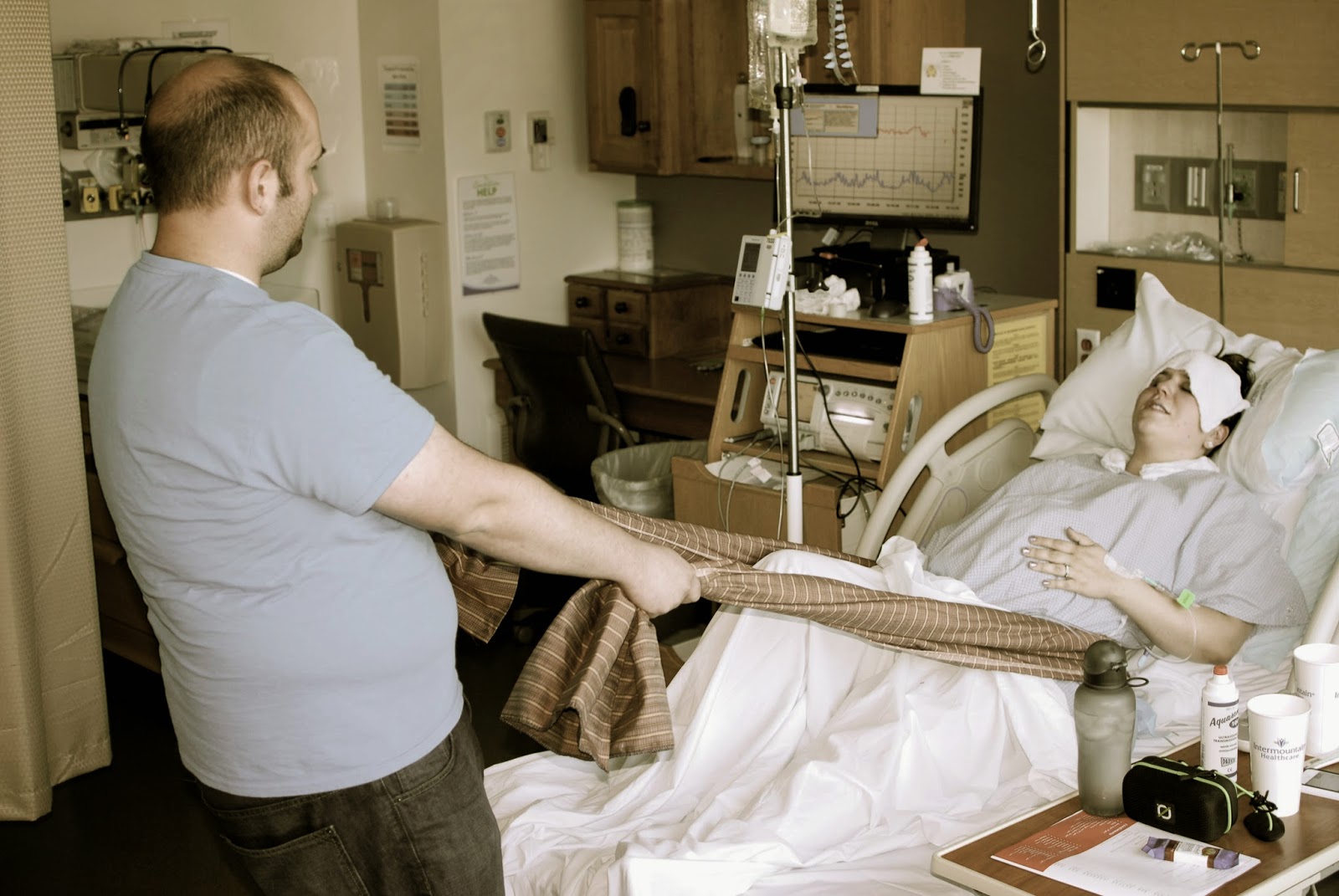 [I really want to stress here, PITOCIN LABOR IS NOT THE SAME AS A WOMAN’S REGULAR LABOR HORMONES! IT IS SOOOOO MUCH HARDER!!!!! And because of the Pitocin Ashley was experiencing incredibly difficult very chemically painful contractions almost as soon as labor began….already for many hours!]

Reluctantly nurse Linda turned down the Pitocin from an 8 to a 4. “I will come back in one hour and check and if she hasn’t changed I will have to turn it back up.”
Unfortunately nurse Linda was not a great supporter of natural childbirth, and carried a very contentious aura about her. Ashley said later that she could be having a pressure wave with her eyes closed not even consciously aware that Linda walked into the room and her contraction would hurt more. Ashley very obviously would tense up more when Linda was around. With good reason, within an hour or two of her shift Linda made some incredibly disrespectful comments even affectively making Ashley cry. Hindsight I think both Ashley and Justin would have liked to have requested a different nurse. But it was hard to tell she negatively affected things so much while in the moment. Looking back it was clear. 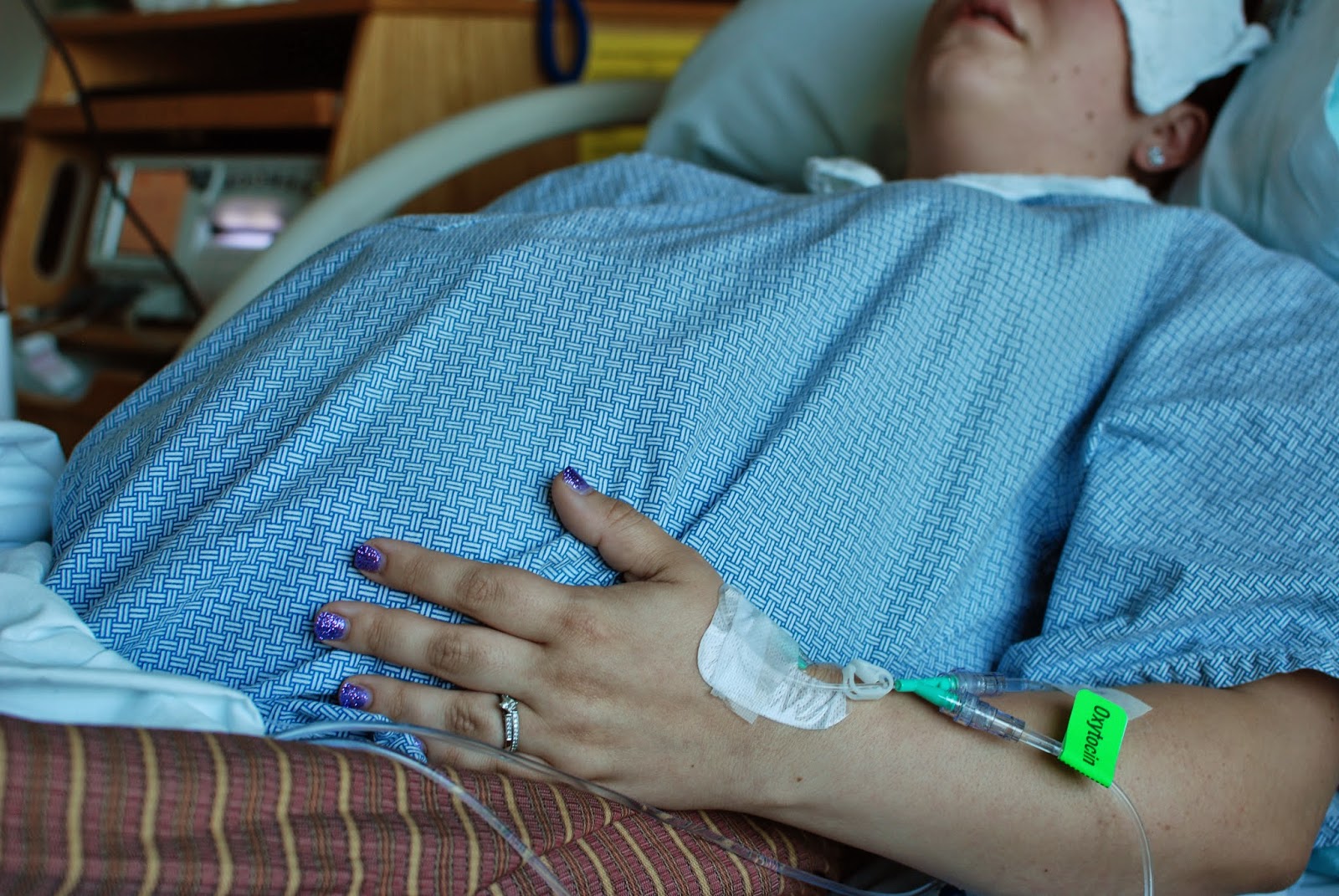 The Pitocin was turned down and Ashley continued to labor regularly. An hour went by and Linda was back immediately to check out the progression.
“Well you are still at a 4 and 80% effaced. You haven’t changed so I am going to have to turn the Pitocin back up.” Justin responded with “Linda, can we please keep it down? Ashley’s labor is clearly still going, she is having regular contractions. And she is progressing in other ways not just dilation.”
Linda pretty much ignored him. Ashley was clearly offended that Linda would ignore her husband like that and her already potent ‘mama bear’ instincts kicked in “No! You said you could keep it down if I progressed. You just told me I was 80% effaced that is more than last time! I have progressed!!”
“Hmmm, I guess you are right, I did write down that you were 65% effaced last time. Well, progress is progress so I will keep it turned down.” Finishing with an air in her voice like she was going to bat for them and doing them some huge favor.
It was at about 1:00PM, Ashley was laboring on the birth ball moaning through her very intense pressure waves. At one point Ashley whimpered with a little laugh in her voice, “I am losing all my body functions, I just peed myself!”
“Do you want to go sit on the toilet for a bit?” 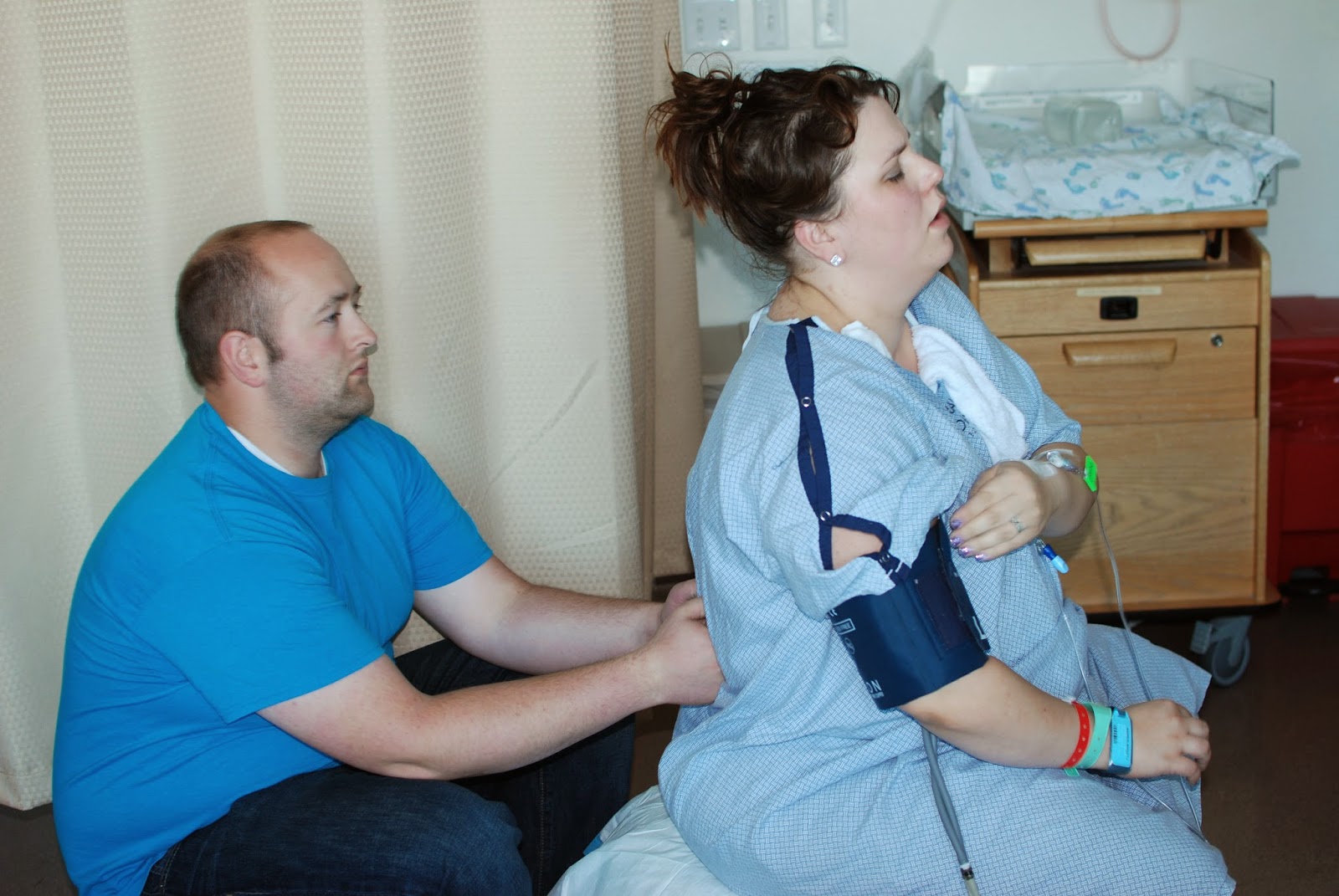 Ashley moved to the toilet and that’s when things started to really became excruciating. Sobbing now she told Justin “I think I want an epidural, I can’t do this anymore.” “Are you sure? You can get an epidural, that’s no problem, just know that once you make that decision you can’t go back.” Quietly they discussed. I went to go get the mothers for additional support because I needed to pump. When we all got back into the room we helped Ashley onto the bed and supported her for another 15minutes before she was sure, she definitely wanted an epidural. 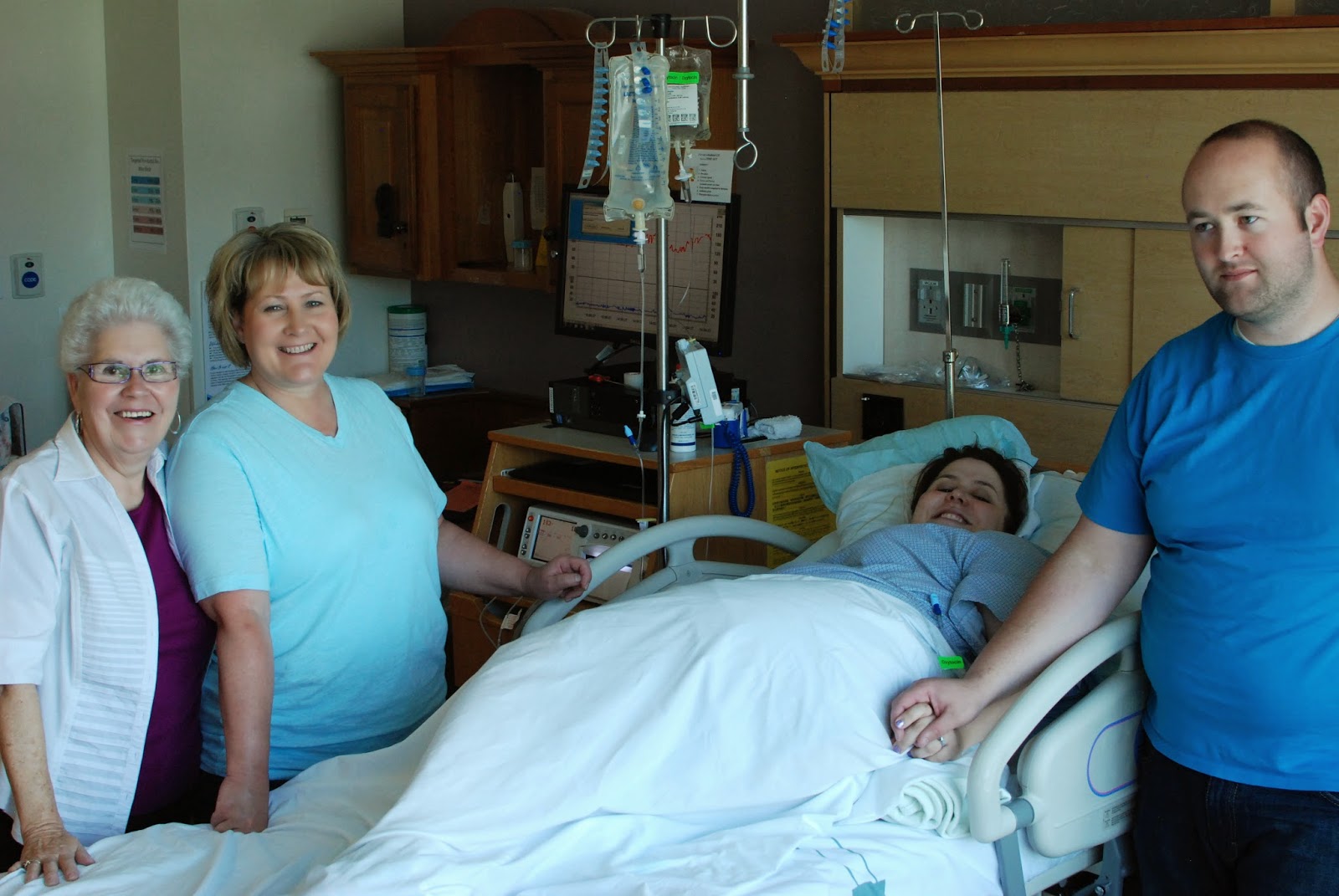 She felt a little defeated. I hope she knows what an amazing feat she did! She labored with hard Pitocin labor for over 6 hours on NO sleep. She was exhausted and with very good reason! Even the best couldn’t have done what she did.
The anesthesiologist came in and did a great job. Quick and kind he cracked a few jokes and helped Ashley feel at ease. As soon as the epidural kicked in we all cleared the room so she (and Justin) could get some sleep. It was the best thing, Ashley was able to rest and regain her strength and at about 6:30PM she was complete and baby Jason was making his way down.
At this point there was a shift change and nurse Linda was gone, and nurse Deb came with a much better presence. While exchanging information between the two nurses one made the comment that she couldn’t feel the bag of waters. It then clicked! “Ashley!” I exclaimed, “When you were sitting on the ball and said you had peed yourself, your water had broken!!!!” Oh my goodness, it made so much sense now I don’t know why I didn’t realize before that it was her water. Especially because it was right after that that her labor shifted and it became unbearable.

Ashely’s Doctor, Dr. Tees came in to check on things and announced that Jason was posterior. With his hand inside up to his wrist he manually turned Jason’s head to be facedown.
Soon it was time to push, it was wonderful because they turned off the Pitocin and epidural so it would wear off and Ashley would be able to feel some of what was going on. She pushed very well, Justin on one side me on the other helping her hold up her legs. Her wonderful mother, mother-in-law, and sweet sister Amanda were all invited into the room to be present for the birth.
Because it was right around a shift change two of Ashley’s doctors were in and around helping and checking; Dr. Wolsey and Dr. Tees. Ashley made sure all who came knew that she absolutely did not want an episiotomy, she would much rather tear on her own if that was the case. Nurses and Doctors seemed to have a well, we shall see approach to her request. Expounding on circumstances on why she may need to have an episiotomy. No. She assured them she did not want it.

A little while later Dr. Tees checked and again Jason’s head wasn’t quite facedown so he turned him again. This time Jason stayed. Around 8:00PM Jason was getting really close and Ashley was doing a fabulous job pushing. Jason was crowning but descending back up the birth path quite a bit between pressure waves. When Dr. Wolsey came in he was concerned that Jason was going so far back and said that it may be shoulder dystocia. Right after that he said, “Well your baby has been in the birth canal a while now which isn’t good, (although babies heart rate was still great) at this point I would perform an episiotomy to quickly get him out but because you prefer not to we will see what happens in a few more contractions.”
Sweet Ashley pushed with everything she had in her and out came baby Jason in a little bundle of perfection! 8:23PM. Immediately it was though the ground became hallowed with Jason’s arrival as grandmas and auntie silently wept at the miracle that was just witnessed. 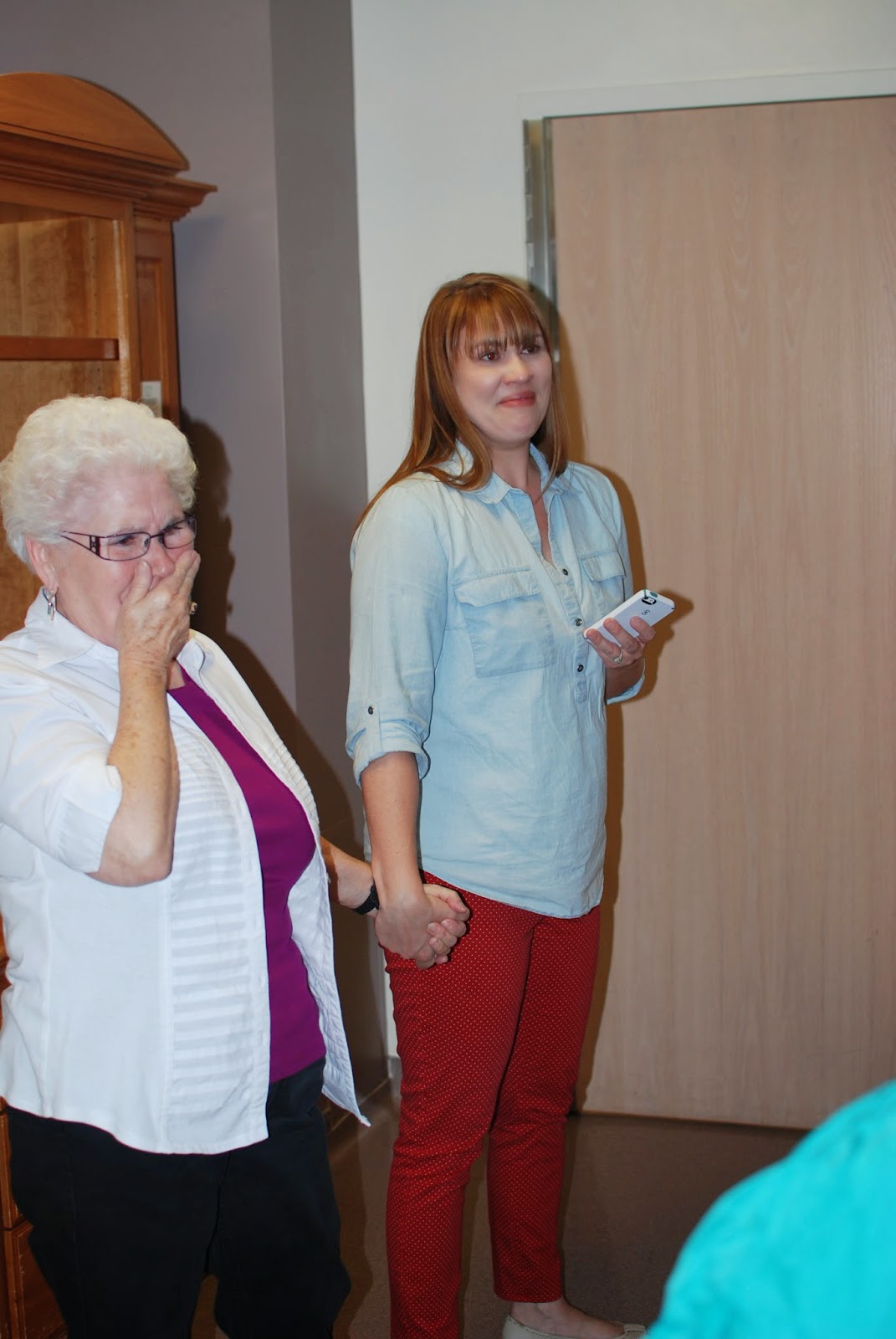 He was passed to Ashley as she became overwhelmed with the emotion pouring from her soul. And Justin; the picture of honor as he stood protectively over his little family. 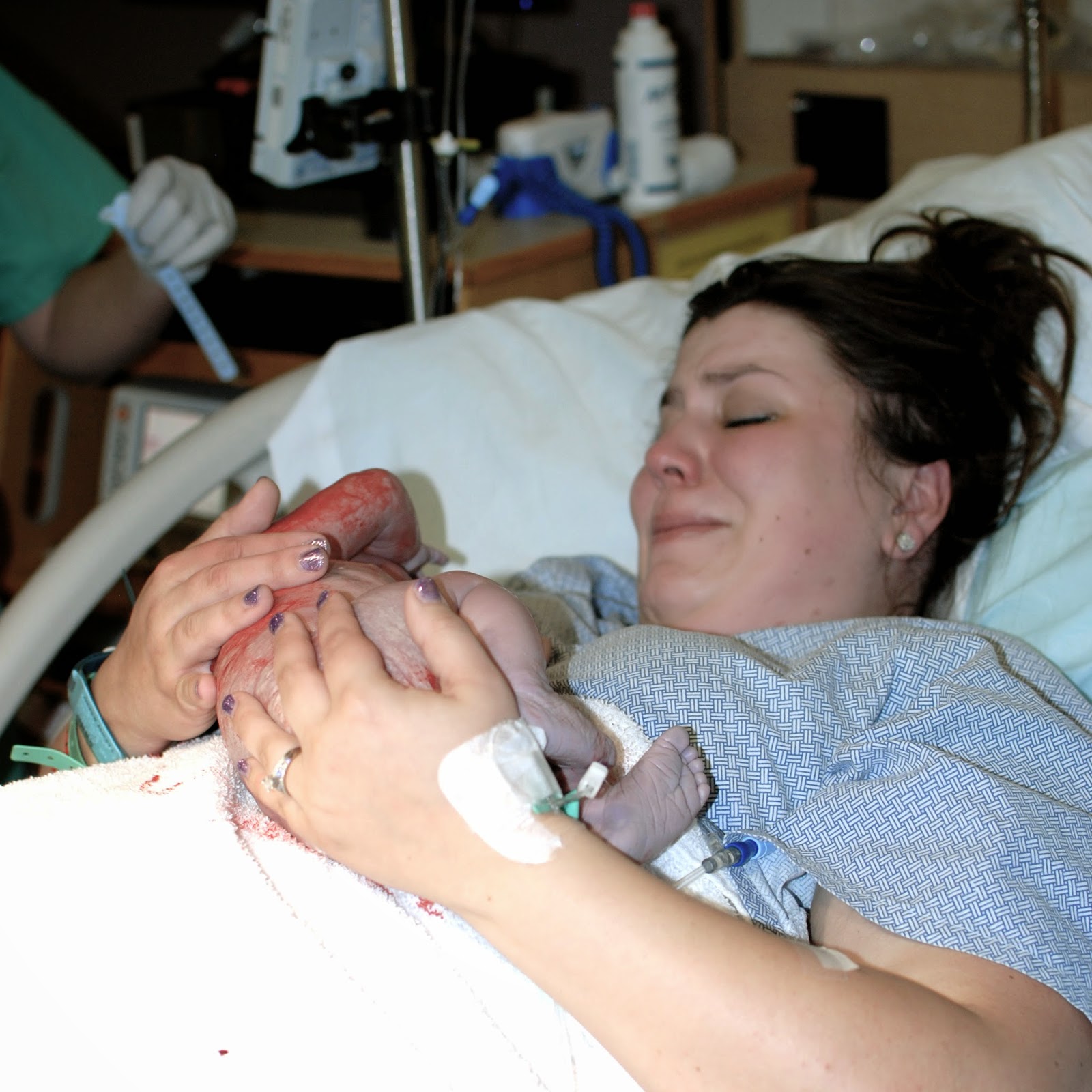 It was as though the room became silent and time stood still for Jason was here and becoming reacquainted with his parents whom he had clearly known before. It was beautiful to see him become completely calm when he was laid upon his mothers chest, periodically stretching his head back so he could look into her face. Keeping a constant hold on his daddy’s finger. 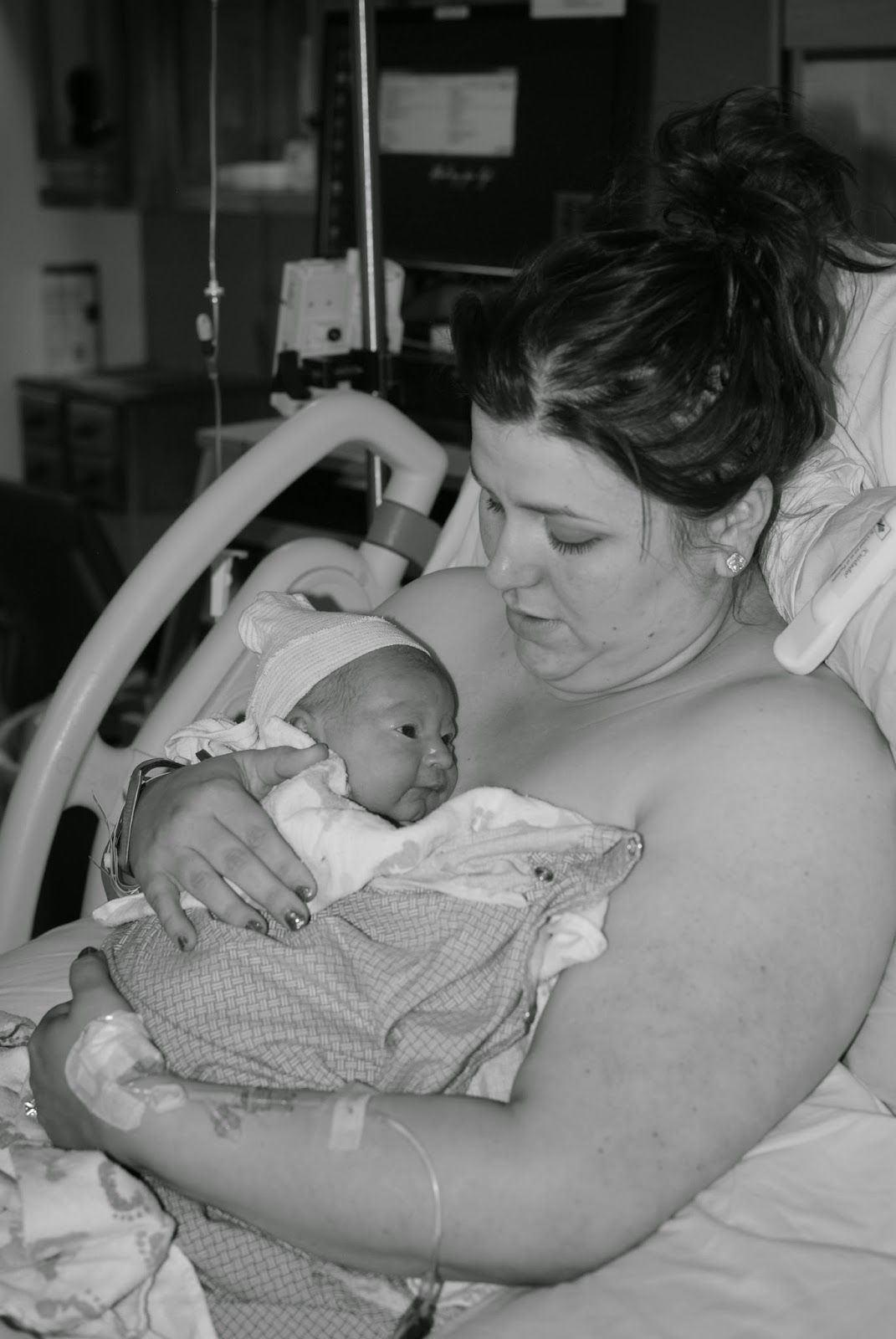 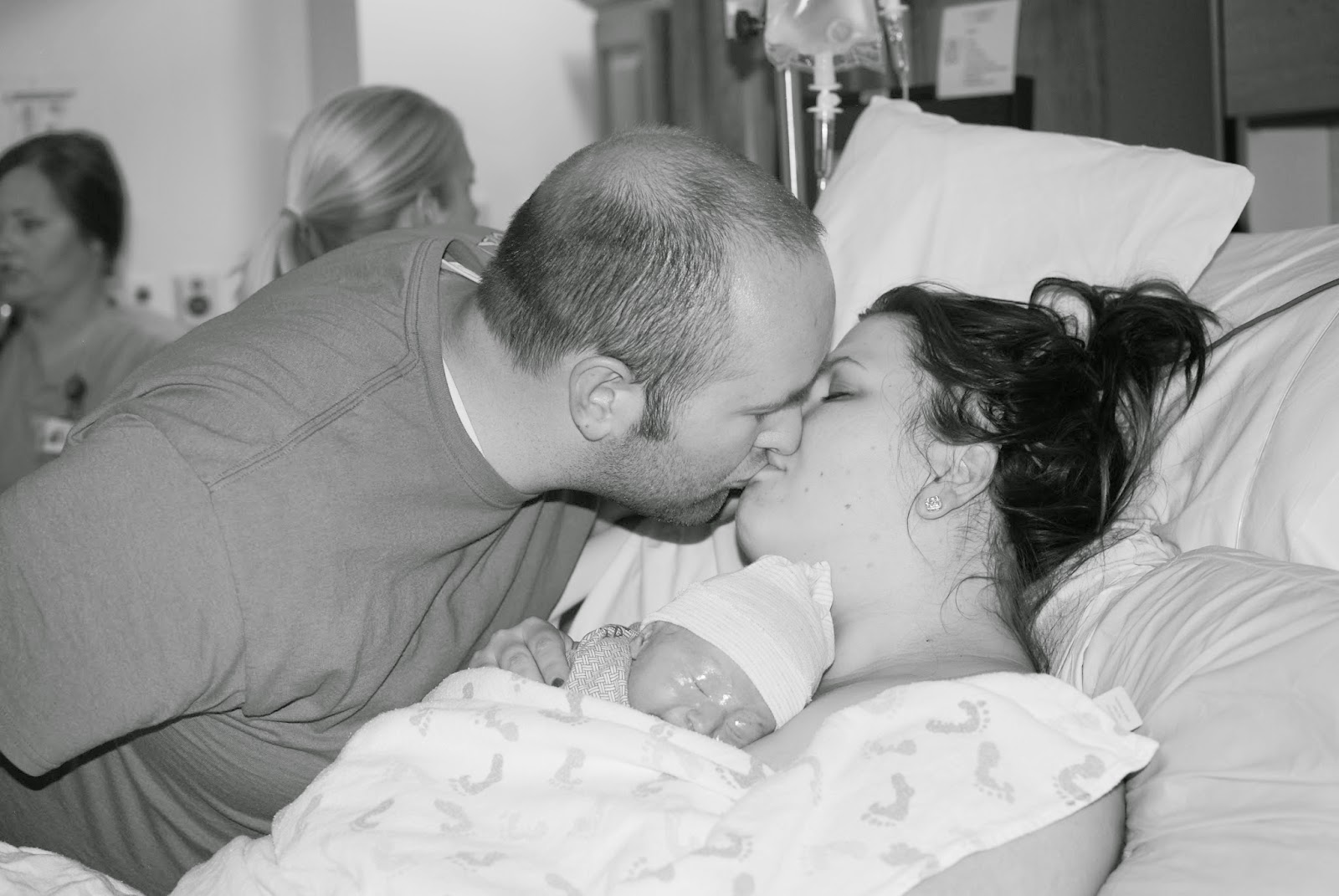 “Well,” Dr. Wolsey proclaimed as he stood up to relinquish his chair to Dr. Tees who was now on call, “You tore.” Implying that he was right, and that she would have been better off with an episiotomy. Dr. Tees took a seat to stitch up the tear and was amazed “There is barely a tear here. This looks great!” I don’t know about Ashley, but there was a smug smile on my face. Of course Ashley barely tore, she is extraordinary! 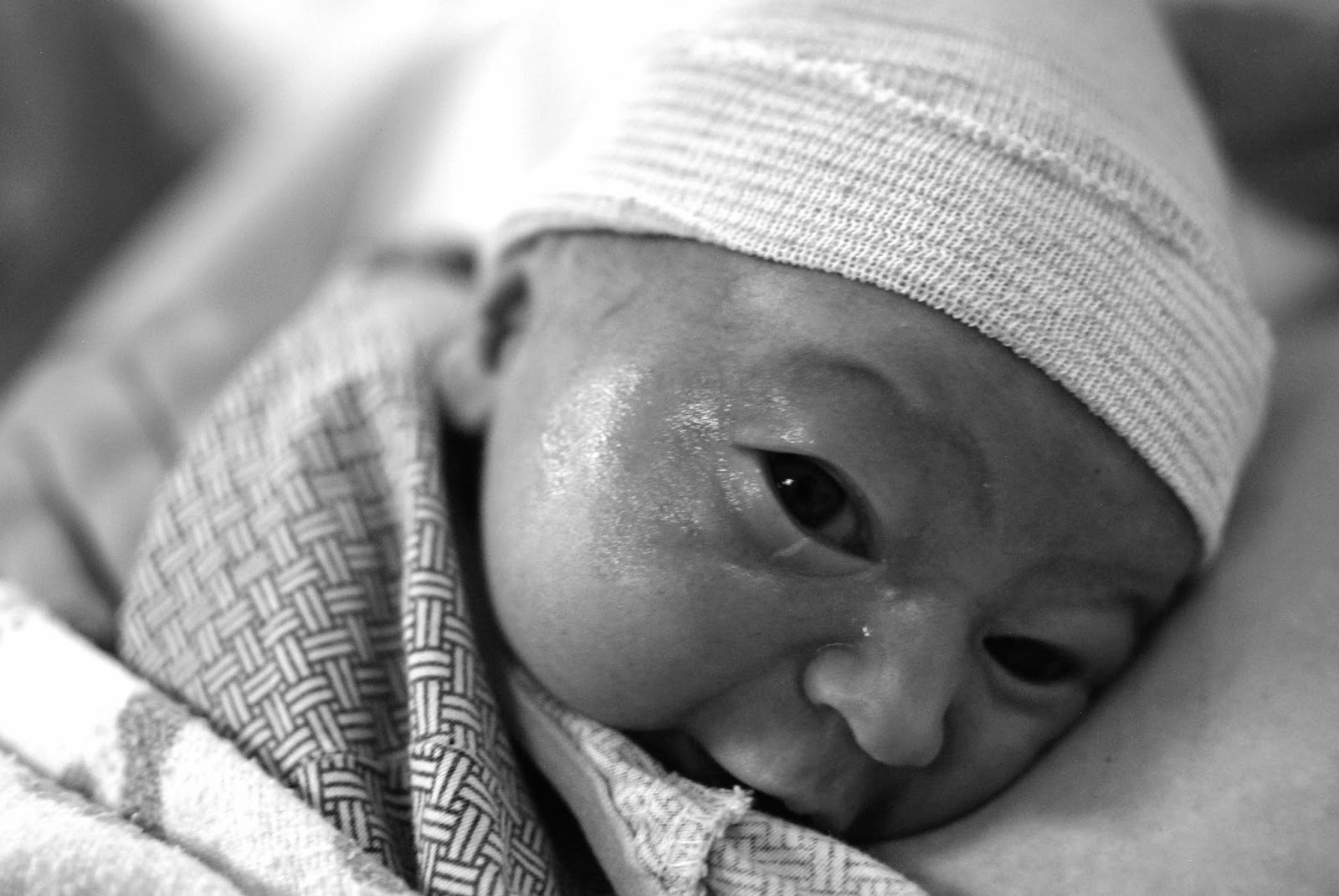 Congratulations on bringing such a darling little guy into this world. And thank you for letting me be there, I feel so blessed.